Struvite calculi, composed of magnesium ammonium phosphate, have existed for thousands of years in human medicine and are a leading cause of calculi in companion animals. Struvite stones have also been called urease, infection-induced, phosphatic, and triple phosphate stones. They are the most common uroliths in dogs, in which most cases of struvite urolithiasis are associated with infection. Management of struvite urolithiasis requires a multimodal approach that addresses the presence of the urolith(s) and associated infection while identifying risk factors that predispose to the development of infection.

Struvite stone constituents exist within normal urine, but stone formation depends on diet, local urinary microenvironment, metabolic factors, and concurrent therapy. The precipitation-crystallization theory of stone formation likely plays a role in struvite urolithiasis.1 In this theory, supersaturation of urine with ions results in precipitation and formation of particles. Particles grow into small crystals and aggregate into larger crystals. Ultimately, calculi form if the microenvironment favors this process.

Urine pH can alter struvite crystal solubility, with acidic (pH <6.3) urine resulting in dissolution of struvite crystals, whereas neutral and alkaline (pH >7.0) urine favor struvite crystal formation. Dietary factors may alter crystal solubility and urinary constituent concentrations. These factors may include a lower anion-cation balance of the diet and/or reduced concentrations of magnesium, phosphorus, or sulfur.2 Protein catabolism can alter urine pH and crystal solubility, increase urea production, and decrease phosphorus and magnesium excretion, which can lead to stone formation. Local urinary factors, including damage to uroendothelial glycosaminoglycans, may promote struvite crystal growth.3 Additionally, sex may affect the likelihood of struvite urolithiasis, with females having higher predisposition for infections.4 Rare risk factors can promote struvite urolithiasis; for example, a foreign body can act as a nidus for precipitation and aggregation of crystals.5

Despite the factors mentioned above, struvite urolithiasis formation is unlikely without concurrent production of the enzyme urease, which is produced by certain bacterial species (BOX 1).

Urease acts to convert urea into ammonia in the presence of water. Generated ammonia (NH3) is free to buffer hydrogen ions (H+) generated from production of carbonate and conversion of phosphorus to phosphate ions, resulting in the formation of ammonium (NH4+). As the hydrogen ions are buffered, the urinary pH rises, contributing to struvite crystallogenesis through reduction in struvite crystal solubility.6 Ammonium also contributes to crystallogenesis because it is a component of struvite uroliths (MgNH4 PO4 6H2O). Ammonium also can induce local glycosaminoglycan damage that may facilitate crystal and bacterial uroendothelial attachment.7

Common findings on urinalysis include hematuria, pyuria, bacteruria, and proteinuria. The urine pH is frequently neutral to alkaline, and struvite crystalluria may be present. Struvite crystalluria does not definitively result in struvite calculi.8 Additionally, iatrogenic struvite crystalluria is possible if urine samples are refrigerated or not run within 60 minutes.9 Given the association with infection, urine should optimally be collected via cystocentesis following appropriate clipping and disinfection of the skin and placed into appropriate transport media or a sterile container for rapid plating.

Struvite urolithiasis in dogs without concurrenturopathogenic urease production or sterile struvite calculi has been reported.1 Its pathophysiology has not been fully elucidated. Distal renal tubular acidosis has been associated with sterile urolithiasis in people and in a study of related cocker spaniels.10 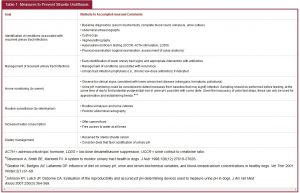 Females have been overrepresented in multiple studies of struvite urolithiasis in both human and veterinary medicine.3,11,12 This may be explained by the increased prevalence of urinary tract infections in female patients.

The mean age of veterinary patients is 3 to 7 years, with a wide range from 1 month to 19 years.13,14 Evidence points toward younger animals (<5 years) having an increased relative risk.15 The cause for this trend is unknown. 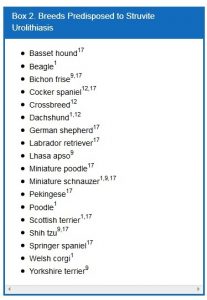 In dogs, struvite urolithiasis is most common (95%) in the lower urinary tract, with approximately 5% of stones reported within the upper urinary tract.3 Roughly 29% to 33% of renal calculi and 42% of ureteral calculi are composed of struvite exclusively.16,18–20 In comparison, humans frequently have struvite nephrolithiasis or ureterolithiasis, with a smaller percentage having cystic calculi.1

The incidence of struvite calculi has declined gradually over the past 30 years, with a more abrupt decline between 1981 and 1998 before reaching a plateau.17 The decline in incidence of struvite urolithiasis is most notable in male dogs, with one study finding a decrease in submissions from 79% to 16%.15 The reduction in struvite urolithiasis in females over this time was less pronounced, from 97% of submissions to 68%.15 The reason for this decline is unknown, but the author speculates that calculolytic therapy with effective dissolution diets may reduce the numbers of struvite stones submitted for analysis.

Conventional radiography has been shown to have a 2% false-negative rate in the diagnosis of struvite urolithiasis.22 The sensitivity is excellent for calculi that are >3 mm in diameter.23 Contrast studies using double-contrast cystography have been reported to improve sensitivity to 100%, even for calculi <1 mm.24 Abdominal ultrasonography provides equal sensitivity. Struvite mineral content can be predicted from survey radiographs with the following predictive values: urolith size >10 mm (90%), pyramid-shaped stones (100%), ovoid stones (80%), and smooth stones with blunt edges (75%; FIGURE 1A ; FIGURE 1B ). Struvite stones are radiopaque on survey radiographs but appear radiolucent with double-contrast studies using 80 mg/mL iodinated contrast medium administered via urinary catheter. 22 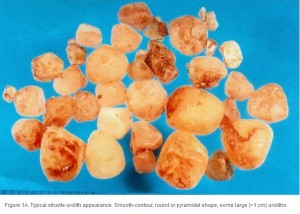 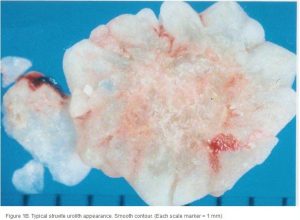 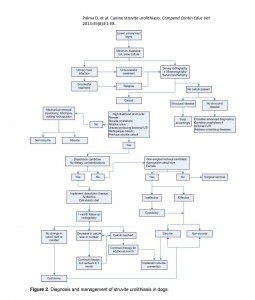 Dietary protein restriction decreases the amount ofurea available for urinary bacterial conversion to ammonium and, possibly, decreases urease production.25 Reducing urine pH increases the solubility of struvite crystals. A calculolytic diet (Hill’s s/d, Hill’s Pet Nutrition, Inc., Topeka, KS) is magnesium- and phosphorus-restricted, reduces urine pH and protein catabolism, and facilitates diuresis through sodium naturesis.3 Biochemical changes may be noticed with dietary adjustment, with a reduced serum urea nitrogen concentration being most reliably observed. Occasionally, mildly reduced albumin and phosphorus may be noted in the first month of therapy.25 Elevations in alkaline phosphatase activity are sometimes recognized, but the cause is unknown.23,25 A biochemical change compatible with dietary influences can aid in determination of owner compliance. While struvite crystalluria does not mean struvite calculi are present, this finding should resolve and can be used as a measure of owner compliance.23 Another diet (Royal Canin Veterinary Diet canine urinary SO 13, Royal Canin USA,

Inc., St. Charles, MO) has been shown to be effective in dissolving struvite calculi in an ex vivo model.26

The high sodium chloride concentration of calculolytic diets may be contraindicated for animals with hypertension and cardiac disease because it may cause volume expansion and exacerbation of these diseases. The reduced protein content may be inappropriate for young and old animals.3,23 The increased lipid content associated with protein restriction creates concerns regarding hypercholesterolemia, and concerns about the induction of pancreatitis in at-risk patients have also been expressed.3

Appropriate antibiotic therapy must be used in conjunction with calculolytic diets. Struvite stones that form in the presence of infection contain layers of bacterial colonies. Dissolution therapy results in a sustained release of viable bacterial pathogens as the outer mineral layers dissolve. It is important to perform urinalysis and culture every 4 weeks during therapy to evaluate for changing resistance patterns.25 Evidence of a persistently alkaline urine or active urine sediment may suggest ongoing infection. Successful stone dissolution with antibiotic therapy and a noncalculolytic diet has been described.26

The average duration of dissolution therapy in dogs is 3 to 3.6 months, with a range from 2 to 5 months.27 The duration of therapy is individualized to the patient. Larger calculi have a reduced surface area relative to small calculi and therefore take longer to dissolve (FIGURE 3A; FIGURE 3B ; FIGURE 3C). Clinical signs vary but often improve during the first 10 days of therapy in accordance with infection control.3 Clinical signs do not predict calculi dissolution, and serial objective monitoring (radiography or ultrasonography) is important to success. Serial radiographic assessments are recommended at 4-week intervals to detect changes in calculi number, location, and size.2,23 It is important that the same radiographic technique be used at each evaluation and that it is optimized for enhanced abdominal contrast. Medical therapy should be continued 1 month beyond radiographic clearance because calculi <3 mm cannot be accurately detected by radiography. Abdominal ultrasonography may provide a way of detecting small calculi without the invasiveness or risk of iatrogenic infections associated with contrast cystography.3 The authors recommend serial radiography until the calculi are no longer visible and focused ultrasonography before discontinuing dissolution therapy. 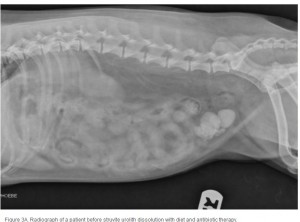 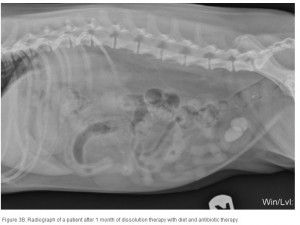 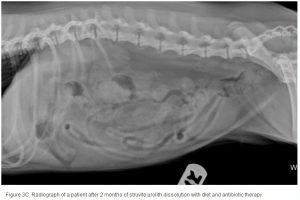 When dissolution dietary compliance cannot be achieved, using urinary acidification with D-L methionine could be considered. A recent abstract demonstrated efficacy at 100 mg/kg PO q12h when given with appropriate antibiotics even when diet was not changed.28

Evaluate for causes of treatment failure

Evaluate for cause of urine retention

Lithotripsy involves fragmenting stones mechanically using either extracorporeal shock waves or a laser. Cystoscopic retrieval and lithotripsy provide the clinician with minimally invasive options in the management of cystic, ureteral, and renal calculi, reducing patient morbidity. Large studies evaluating lithotripsy in the treatment of canine struvite nephrolithiasis or ureterolithiasis have not been performed. Only 33% of nephroliths and ureteroliths are composed of struvite in dogs.19

Laser lithotripsy techniques have been described for nephroliths, ureteroliths, and bladder and urethral calculi in dogs.32,33 Because direct contact with the calculus is necessary, a surgical or cystoscope-guided approach must be used. Stone composition does not influence the efficacy of fragmentation.33 Procedure times are shorter in female patients (median time: 42 min) compared with male patients (median time: 143 min) and for urethral calculi (median time: 70 min) compared with cystic calculi (median time: 105 min).32 Given the cost of lithotripsy equipment, limited accessibility, and procedure time, many clinicians prefer cystotomy or scope-assisted retrieval techniques. Minimally invasive techniques such as percutaneous cystolithomy have allowed visualized access to the bladder for retrieval of calculi and simultaneous access for mucosal biopsy/culture. Direct visualization of the bladder lumen can help reduce the likelihood of leaving calculi behind, which can occur with traditional cystotomy. The residual calculi rate with cystotomy has been reported to be as high as 20%.34

Indications for surgical therapy include obstructive calculi of the urethra, renal pelvis, or ureters; failure of dissolution therapy; or unacceptable clinical signs associated with urolithiasis, or as a means of definitive treatment.35 Surgical intervention provides benefits such as reduced time to effective therapy, definitive diagnosis of stone type (via quantitative stone analysis), reduced risk of urinary obstruction, ability to collect samples for biopsy, and potential to recover renal function with resolution of obstructive calculi.

Acetohydroxaminic acid (AHA), a competitive and noncompetitive inhibitor of the enzyme urease, can inhibit stone growth but is rarely used in dogs.39 Adverse effects are common, including hemolytic anemia, vomiting, anorexia, hyperbilirubinemia, and teratogenicity.40

Dietary intervention may be considered for sterile struvite calculi, as is commonly done in cats, although no clinical studies have been performed evaluating the efficacy of preventive diets in dogs. Dietary modification designed to achieve urinary pH <6.3 may be helpful because acidification may prevent struvite crystalluria, which could be important in preventing recurrent sterile struvite calculi, but this has not been critically evaluated. Some authors would consider urinary acidifiers (D,L-methionine) for prevention of struvite crystalluria when medical management fails to achieve optimal pH (<6.3).28